Here at EEI Creative Arts, we are excited about virtual production and believe it’s the future of film with all the advantages it provides, from lowered costs to real-time adjustments, which we covered in a previous blog post. But don’t just take our word for it. By now, most people have heard about The Mandalorian’s innovative use of LED walls and the Unreal Engine to create photorealistic backgrounds that could be adjusted in real-time and filmed with live action footage to give the actors a better sense of space and realism. More and more studios are adopting this and incorporating LED walls into their space. But it’s not just isolated to Hollywood.
Now, universities around the country are creating curriculum and programs to train the next generation of filmmakers virtual production technology, which is a sign that virtual production will soon become mainstream. Universities such as NYU, USC, Rochester Institute of Technology, LSU, and Chapman are the pioneering leaders in this quickly emerging field.

These programs teach students how to combine the digital and real worlds by training them how to use software like Maya, Unity, and Unreal Engine to create backgrounds and images that are displayed on LED walls. Chapman University is the first university to have installed an LED wall on their campus, while LSU received a $1.25 million grant from Louisiana Economic Development to create a curriculum and virtual production studio to train students and industry professionals in order to accelerate the state’s content creation process and talent development. Sam Claitor, head of production at Crafty Apes, a visual effects studio, likens virtual production’s disruptive technology to digital cameras by stating, “Virtual production is going to disrupt the film industry. The transition is comparable to when cameras went from shooting film to digital.” 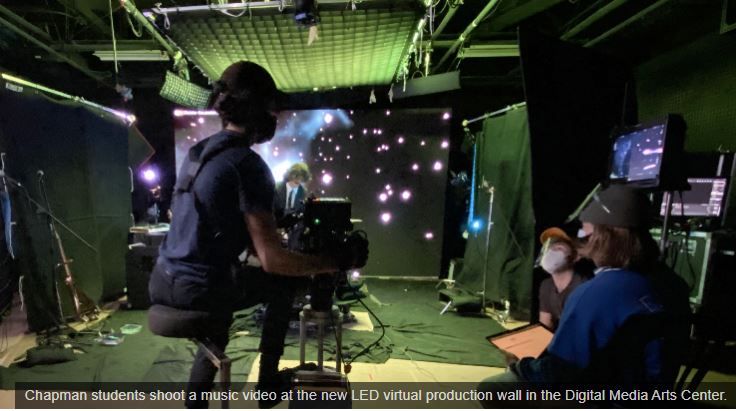 Similarly, RIT has received a $275,000 grant from Epic Games, creators of Unreal Engine and Fortnite, to help bring virtual production to their students. The university has also partnered with The Third Floor, a leading visualization studio, to teach students the hardware and software for virtual production. David Long, the director of the Magic Center at RIT, explains that while RIT is obviously not in Hollywood or the first place people think about when it comes to film and entertainment technology, with its expertise in science, engineering, art, and technology, RIT is the perfect place to train the next generation of filmmakers in this emerging technology.

As virtual production enters the mainstream, there will be high demand for people who are trained in these technologies and processes. Get ahead of the curve by signing up for our courses in 3D animation and visual effects here!

Return To: Spring Program Sneak Peak! Next Up: Commonly Asked Questions About Screenwriting and Visual Storytelling